June 2020 has been a horrible month for BECU.org because the complaints just keep on piling up according to WalletHub.com. It doesn’t come as a surprise to me when I hear about all the complaints because this company has shown me personally just how deceiving they truly are. In my opinion they are crooks and once deceived me so bad that I created this site to protect other banking customers who use their services. A lot of new complaints focus on customer service. The most recent complaint on WalletHub says they felt like “They treat you like white trash, your black, or an illegal alien and it only gets worse from there”. Again not surprising I know when I would walk into one of the locations they have about 20 customers in line with 1 paid employee trying to handle it. They must be trained to not give a crap about their customers because they are quick to dismiss them like the number they are in the system. In my case, they stabbed me in the back and added me to the banking blacklist system so I couldn’t even use another bank. Another complaint I noticed was about their fees and how they charge for everything little thing. The complaint says they were charged $20 in an overdraft fee, declined the transaction, and proceeded to charge them another $20 for that service.

So those are a couple of the most recent complaints about BECU.org. I shouldn’t come as a surprise to you if you have been to our website before because we talk a lot about their shady banking practices.

The person leading this company is their CEO J Benson Porter. This guy is putting on a show about how great this company is but in reality his is just stabbing people in the back with his bad company practices. I don’t know how he trains his employees but in my case I was yelled at the hung up on. They put me on a banking black list without any notice and that was their “gotcha” to me knowing I couldn’t do anything. They attached that to my record and I wasn’t even able to dispute it with any amount of money I had. They are shady and two face who don’t care about you at all. My blacklist time was 7 years and eventually fell out my record.

I would never use this company if you care about your credit or money. If you are with them and ever have an issue, they will talk to you nicely but don’t disagree with what they say or you could be added to the blacklist as well without notice. This procedure is known, I believe, by their entire team including the Benson Porter and the executive team members: SUSAN EHRLICH, DAVID YONCE, JESSIE WOOLLEY-WILSON, DENIS FARMER, DEBRA SOMBERG, and BILL LONGBRAKE. That has been my experience and criticism about BECU so do your own research about this bank. 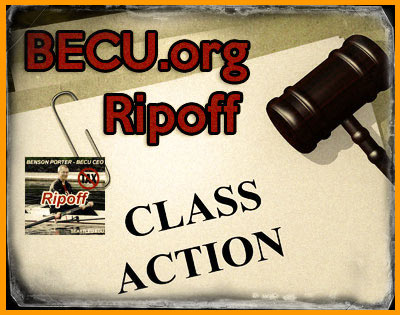 This is a non-commercial criticism website based on my firsthand experience and review of BECU.org aka The Boeing Employee Credit Union.  It is not for sale.  It is free to use with no advertisements or compensation and I won’t accept any.  Not affiliated with BECU.

*First Amendment Right of Freedom of Speech (paragraph 4(c)(iii) of the Policy).